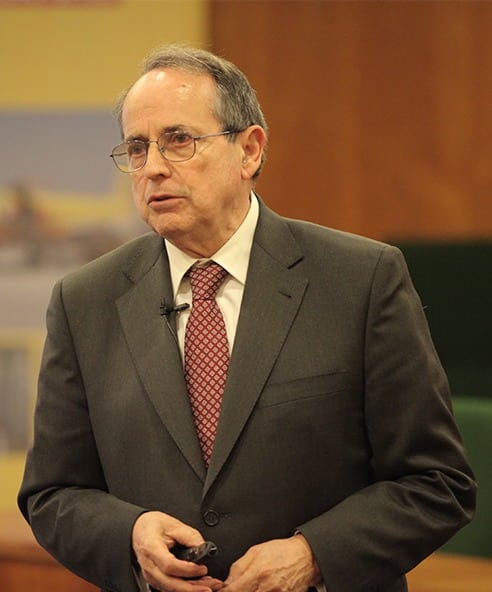 Professor Toribio graduated with a B.Sc. in economics from the University of Barcelona. He also completed Harvard Business School’s International Teachers Program (ITP), as well as graduating with an M.A. and a Ph.D. in economics from the University of Chicago.
Professor Toribio has had a long, successful career in the public and private sectors, as well as in academia.
In the public sector, he started his career as an economist for the Banco de España (Bank of Spain, the central bank). Afterward, he became a senior official, first working as the general manager in charge of financial policy in Spain’s Ministry of Finance. From 1996 to 1998, he was an executive director of the International Monetary Fund, based in Washington, D.C.
In the private sector, Professor Toribio has served as the chairman of several financial and investment companies, such as CaixaBank Monaco and InverBan, S.V.B. He has also served on the Board of companies such as La Caixa, Nestlé, Abertis Telecom, InverCaixa (now La Caixa Corporate Finance) and Xfera (now Yoigo). He previously held the position of research director at several banks, including the Banco Urquijo and Banco Hispano Americano.
He has also served on the Board of a number of institutions and nonprofit companies. He was chairman of the Spanish Institute of Financial Analysts (IEAF) from 1982 to 1988, vice-chairman of the Market for Financial Futures and Options (MEFF) from 1988 to 1996, chairman of Spain’s Financial Assets Intermediaries Association (AIAF) from 1986 to 1996, a member of the Board of Directors of the European Federation of Financial Analysts Societies from 1982 to 1988, chairman of the CODESPA Foundation, and a Board member of the Círculo de Economía in Barcelona.
Professor Toribio has also served on the Boards of Amper and the ITM Club and on the Abertis Advisory Board. He was a weekly speaker on the CNN+ television program Economía a fondo (“The Economy in Depth”).
Professor Toribio’s research and teaching activities focus on business economics, monetary theory, international economics, the economics of the European Union, and financial institutions. He has had numerous academic and practitioner-oriented articles and case studies published on these issues.
Professor Toribio wrote the books “La crisis subprime y sus lecciones” (“The Subprime Crisis and Its Lessons,” Banco Caminos, 2008), Globalización, desarrollo y pobreza (“Globalization, Development and Poverty,” Círculo de Empresarios, 2003), and “El sistema financiero español: su funcionamiento y reforma” (“The Spanish Financial System: Its Operation and Reform,” Orbis, 1986).
Areas of interest